As I sat reading the newspaper today, I got to thinking, why do we wait until someone dies before we get to know them?  I used to work around senior citizens, working with them was a small portion of my job but my office was in the senior’s center so I got to know them and see them daily.  But even when I was working, I found out things about the people I was

around every day after they were gone.  And it happened again today, I noticed that 2 of the seniors I knew from work had passed away and as I read their obituaries I found out some amazing things about them, leaving me sad that I didn’t take the time to get to know them, I mean really know who they were when they were alive and I saw them daily. Sure, I knew them on the surface, knew what they liked to do at the senior’s center, knew what they did in my little world, but not who they were over the course of their life.  For example, one of the ladies was a regular at the center every couple of days.  I knew that she took a weight training class twice a week, did yoga regularly, was a part of the book club, she played scrabble weekly, she volunteered in our kitchen, delivered for Meals on Wheels and was part of the Naturalists Society.  But what I didn’t know and wish I did was that she was among the first women in Canada to join the Canadian Armed Forces, enlisting in the RCAF Women’s Division in 1943.  As a senior she traveled to Kenya, the

Baltic Sea, Haida Gwaii, Australia, New Zealand, Malta, Newfoundland, Cuba and Mexico.  She went for a 2-week vacation in England and Scotland when she was 94 years old.  She died with 6 years left on her passport which her family says was evidence of her optimistic attitude.  The words in the last paragraph of her obituary left me wanting to go back and spend more time with this amazing woman.  They said that she has been a role model for all on how to live a peaceful, joyful and productive life without judgement but with grace, vibrancy and love.  What a beautiful legacy to leave your family and friends with. That’s what I am striving for, those are things that I hope my family and friends can say earnestly about me both while I’m still on this earth and when I have passed on.

Another “young” lady passed away at the age of 87. I knew her as someone who was passionate about the environment, she sang in the local choir, took Tai Chi weekly and loved to walk everywhere. What I didn’t know was that she sailed her boat to New Zealand

where she then hitch-hiked and worked her way through all New Zealand and Australia, she also was a pranic healer and her family referred to her as the natural dog whisperer.  Why didn’t I know this about her, I saw her regularly?  I guess my excuse is that I was far too busy with my work to take the time to spend with these interesting and amazing people that I saw everyday. I remember learning about another lady that I knew as an avid table tennis player but I later learned (again, from her obituary) that she was a nurse in one of the wars and that she met her husband while stationed overseas. They both served this country and left the military with honors and were married for over 50 years. Those kinds of things are fascinating and inspiring to me, can you imagine taking the time to hear about their history over lunch?  There is so much wisdom, culture and history in our senior citizens and it’s a shame that we don’t take the time to soak it all in while they are alive to hear the story with their own words and through their own eyes.

One of my daughters is in Health Care and she has repeatedly suggested that my husband and I write down some of our memories so if heaven forbid, we are ever in a care home, our caregivers or volunteers have something that they can talk with us about that we can relate to.  At first I thought it was silly but I’m beginning to think that it’s not such a bad idea after all.  I can’t be the only person that realizes that you know a lot of people but that you don’t really know them at all. Do you really know what they are about? Where they met their spouse, what they did for a living, what kind of family did they come from?  Where were they born? When did they come to this country and from where?  Were they raised on a farm, did they go to school in a one room shack or did they have to quit school when they were 12 to work on their farm?  What kind of changes have they seen in the world? 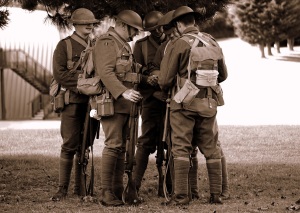 Canada, I learned that my brother was named after a great aunt, and that my 3rd great grandfather as a Captain during the civil war, had to surrender to the Confederates because his wife had been captured. These are things I never knew because either I never thought to ask or because nobody thought to share the information.  Now that there is nobody left to pass on the history, I am trying to piece it together by researching and studying and gathering information from anywhere I can.  We have made the decision that we don’t want our kids to not know their family history when we pass on. We are sharing these findings and we are acknowledging our history and cataloging details so we leave a family record for those that come along after us in the hopes that they won’t learn about their family while reading our obituary in a scrap book somewhere.

I guess what I’m trying to say is that we should all do better about paying attention to those around us while they are still alive, even though I am grateful for the ways that death will continue to teach us how to live. As for me, I’m going to take a little more time to ask the old guy I meet while walking the dog a little about himself. I know I will be pleasantly surprised and am looking forward to learning a little something about somebody that I didn’t know yesterday.

Someone is sitting in the shade today because someone planted a tree a long time ago.  Warren Buffett