I have had a great weekend – my nephew and his son came and stayed with me for the weekend while taking part in a hockey tournament.  I know, I know, how Canadian is 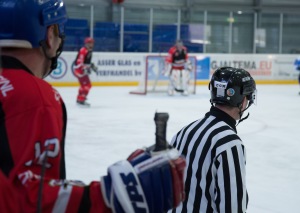 that?  Anyway, my nephew and I did a lot of reminiscing which then became the inspiration for this next post.  We have been very lucky that for the majority of our married life we have been able to live near family which meant that the cousins spent a lot of time together growing up, camping, family outings, holidays, etc.  That right there is what life’s all about, don’t you think?  Family, togetherness, loving and supporting each other.  Don’t get me wrong, we are a regular family with a regular amount of dysfunction but we love each other and have been blessed with strong family roots.  In fact, years ago, when our kids were younger we rented the fire hall for our Christmas dinner’s as nobody’s house was large enough for everyone!  When my husband and I bought our most recent fixer upper, we invited everyone up for a landscaping party over the Easter weekend.  The deal was that we would provide the beer and good food and in return everyone was going to bring a plant and help lay sod in both the front and the back yards!  We got the best deal if you ask me – the neighbors said it was like watching those renovation shows on television – every time they looked out the window the yard looked different and within 3-4 hours, we had a beautiful and completely transformed yard!  Again, another example of how this family can pull together!

As my nephew and I were reminiscing, I started to think of how it all started and how far blind faith and love will get you.  We moved to Northern BC right after we got married and to say it was a culture shock is an understatement.  I mean I moved from Denver Colorado (population of 2.8 million) to Cassiar BC which is now a ghost town but in its heyday had a

whopping population of 1500.  It had a school, a pool and hockey rink, a theatre and 2 churches.  If I remember correctly there was also a small store, a post office and a bar / liquor store.  My husband and brother in law both landed jobs at a gold mine in Cassiar and since my brother in law wanted to bring his wife and kids (one being the nephew I’m reminiscing with) and we were newlyweds who was anxious to live together so we put all our wedding gifts and furniture in storage and the hunt was on for somewhere to live in the cold barren north.  When we arrived, someone from town told us about an abandoned cabin very close to the mine, so off we went to check it out. Now the main cabin was beautiful, it was 2 stories with tons of room for my brother in law and family and there was a detached garage (shed) that my husband and I would move into.  I wasn’t sure what to expect and I was very uncomfortable just “squatting” in somebody else’s home but we did it anyway (remember that thing I said about blind faith and love?).  The very first thing we did was to build an outhouse and to do that, we had to first dig a hole, so we did…..by hand……holy crap that was a tough job but obviously necessary!  Next on the agenda was to make the garage into a cozy little home (approximately 200 square feet).  We made a small kitchen area and installed a heavy-duty wood stove.  Next, we bought a bed, which my husband said we should hang by chains because heat rises however I squashed that idea (it just felt a bit too weird for me) so we just bought heavier blankets and kept the bed frame firmly planted on the floor.  No power no problem I called my dad and asked him to send me a butane curling iron because a newly married girl should look good for her man, right?!  My dad was flabbergasted when he learned where we were going to be living and told everyone if this marriage lasts through this living arrangement, then we were going to be married for a very long time and he was right, married for 32 years and still going strong!  Now, because it is extremely cold in northern BC (that particular winter the barometer reached a whopping -52 degrees Celsius), we had to ensure we were well insulated in the cabin, especially since we could 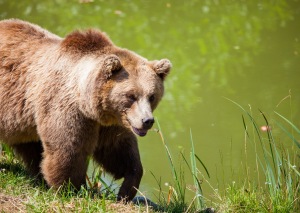 see the bear fur as they were scratching their backs on the outside of our cabin!  Eeek!!  The only wild animals I was used to was the mascots at our schools (tigers, panthers, raptors, and it pains me to say that in one school the mascot was a burro, that’s right a jackass), certainly not grizzly bears, black bears, wolf, cougars, you know what I mean?

He asked me what his mom and I did everyday…….we didn’t even have electricity (or running water for that matter) so we would exercise to a Jane Fonda cassette every morning then we would go for long hikes and armed with our trusty little book of wild animal tracks we became masters of knowing what track was what, whether it was a grizzly bear or a moose or a wolf or a racoon, before long, we became fairly competent

woods women if I do say so myself.

One of the great things about living in the north is that in the winter you have a shortest day of the year where it is dark for most of the day and night but in the summer, they have the longest day of the year where it is light for most of the day and night and that is when it’s time to PARTY!! We would fly in live lobster and have a shing ding to top all shing dings! In the summer, it rarely gets totally dark so you can even read a book by the light of the moon, it’s an amazing thing to witness at least once in your life.  The other prize that God gives you while up north is the beautiful show called the Northern Lights – wow is all I can say about that.  They dance like ribbons in the sky showing their colors to all who are lucky enough to be able to witness them! This is just another thing you should put on your bucket list to see, you won’t regret it, I promise!

This was a time in our life when things were simple, a time before kids and other responsibilities came – meals were simple, days were spent being present in the splendor and wonder of the north.  There were no electricity bills, phone bills, cable or internet bills, living was easy and natural.  We spent time off snowmobiling, 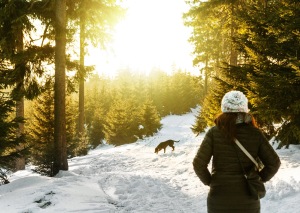 ice fishing, shooting pellet guns off the deck aiming at cans hanging in the trees, we did our laundry at the mine and spent Friday nights there for steak night, life was good!

I remember one time when my sister in law and I were heading into town and hadn’t noticed that the dog line had gotten wrapped around the trailer hitch on the back of the truck (don’t worry, no dogs were hurt in this mishap).  Off we go to town and about a ½ mile down the road we realized that the truck seemed to be having a hard time getting up to speed or gaining any traction so we stopped and got out to investigate.  We thought maybe the 4-wheel drive wasn’t engaged and we needed to do it manually but to our surprise, we had a huge tree following behind us, yes, the dog line was indeed attached to a very large tree which we pulled right out of the ground!  Talk about embarrassment, that was a grand champion moment!

Another day when the men got home from work we saw a car drive up the driveway and a very nice man knocked on the door.  When we answered the door and asked him what he needed he told us that this was his cabin. True story!  We apologized and told him we would vacate the premises asap and he said not to worry.  He said all I ask is that you leave the place like you found it when you go and off he went, never to be seen again! We lasted at the cabin for approximately 8 months and by then we were all getting a little bushed, not that we missed having television or missed having wifi or even that we missed having electricity but we missed the rest of our family.  We missed being able to see them, missed talking to them, we missed the connection with the rest of our family.  I can honestly tell our kids “you complain about your first place, but you should see your dad’s and my first place”!  Our Northern experience was a great time in our life that set us on a path that we will never regret!