“To the rational mind, nothing is inexplicable, only unexplained.”

Something  very strange happened to me a couple of weeks ago and I can’t for the life of me figure it out. It’s left me wondering about a higher power out there we don’t know or understand. Whatever it was, I am thankful to say the least.  It may take a little bit to set the stage, but bare with me because I will get to what happened eventually.

I was watching 2 of my grand daughters for the weekend as their parents were out of town. I have to admit that I was a little apprehensive about it because my husband was

in camp working and there is this little thing I carry around with me at all times (my MS) so how I feel can change minute to minute, hour to hour, day to day, but things were going along great. The girls played well together, we went to town, they helped me plant some flowers, they ate their dinners, had their showers and went to bed perfectly, I was pleasantly surprised! We laughed and played and played some more! I don’t know what I was so worried about, I have tons of support and if I need help my family are always ready, willing and able to lend a hand, all I have to do is ask.  I can tell you one thing, I would never have been able to spend that quality time with those beautiful grand kids of mine if I was still working. MS takes a lot of effort to manage well and to prepare to do the things that are meaningful for me.  For example, I rested up for a week before my big weekend, I paid particular

attention to what I was eating so as not to aggravate my inflammation and MS symptoms, I decluttered in the house so the girls were able to roam around freely and so I didn’t feel like there was too much going on at once (helping me with some anxiety that seems to be popping up for me occasionally these days), I prepared snacks  (boops – aka berries) and made sure I had good choices to grab when they were snacky or when I was snacky (which is most of the day)! I was ready and excited for the weekend to arrive!

When the girls woke up on Saturday morning, we decided to watch The Wiggles (if your a parent or grandparent of small children who has never watched The Wiggles, you must live under a rock! Anyway, The Wiggles were dancing around on the screen and the girls

were dancing and wiggling with them but they were starting to get hungry, so I wiggled my way to the kitchen to whip up some sausage and eggs when I realized that the amazing diamond ring my husband gave me for Christmas was NOT on my finger. EVERYBODY, STOP WHAT YOU ARE DOING!! This ring means so much to me partly because the diamonds are from the mine my husband works at and partly because I had lost the diamond from my wedding ring over a year ago and I’ve been without a ring that entire time, and frankly I felt a little naked without it. When I looked down on my hand and noticed it was gone, all the blood drained out of my face, I got a sick feeling in the pit of my tummy and I fought back the tears so I didn’t scare the girls. I didn’t want to take away from my time with them but I was panicking, big time.  I don’t think it’s really that I lost (the physical ring) that upset me most, it’s what the ring represents. What is it with the sentiments of a wedding ring and why was it such a big deal to me?  The classic meaning of a wedding ring is an emblem of love 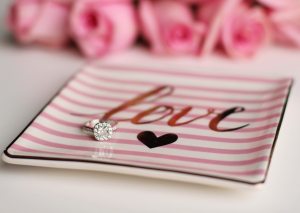 through time, a symbol of devotion and an agreement between two parties to love and cherish one another for the rest of their days.  Sounds a little corny but for whatever reason, the ring is extremely sentimental to me, not to mention the fact that it cost more than my first car (and maybe even my second car).  I wanted my ring back, plain and simple. I wanted to see the colorful light cast by my diamond when the sun hit it at just the right angle.  My husband alway says when my ring is extra sparkly, it means he’s thinking about me. It may sound silly, but while he works away in camp, that gives me comfort.  Those beautiful sparkles (and the 3 main diamonds) also represents the moments of joy and the family my husband and I have created over 34 years of marriage.  I am extremely careful with it.  If I do take it off, I have a specific place I leave it but it wasn’t there, not to mention that I couldn’t remember taking it off the day before for any reason.  I have lost some weight recently so it is a bit loose, but certainly not loose enough to fall off on its own, or would it? Where is it? Stop everything – the hunt is on!

How desperate was I? I will tell you, after I made breakfast, I enlisted the help of a 4 and 2 year old, does that answer the question?  I wracked my brain trying to retrace my steps over the last 24 hours. We tore the house apart. First I thought that maybe (but I was

doubtful) that it slipped off while I was sleeping, so we took the sheets off my bed, including pillow cases and comforter cover.  Because our bed has drawers under the mattress, I lifted the mattress (which felt like it weighed about 300 lbs) and looked in all of the drawers which meant our 2 year old took everything out of them and threw it all over the room all while listening for a little plink meaning that it dropped into the floor.  Next, I stripped the sheets off the bed the girls were sleeping on, again not there.  Then I remembered that I gave the girls a shower so I wondered if maybe it had slipped off my finger and gone down the drain. I called my son in law to come look in the drain and he was going to stop by after work, so that one was on the back burner for a bit. I remembered I did a load of laundry so I tore through the washing machine, then the

dryer but you can probably guess…..it wasn’t there either. I had my daughter’s van because I needed the car seats so I tore it apart – Nope, not there. I even grabbed my insurance papers for the ring and realized there was no “dumb ass lost her ring” clause so back to the drawing board I went, I was like a mad woman on a mission. While we were tearing the house apart, I did all the negative self talk that I could come up with…..I’m stupid, I can’t be trusted with expensive things, I should have known better, I’m so irresponsible, and on and on it went.  I beat myself up all the while getting more and more worked up.

The last and final place that I could think of to look was the kitchen garbage and I was not looking forward to it.  This one required me to psych myself up and when I pulled the garbage out, the girls deserted me, can you believe it?  Where is the loyalty?  I brought the garbage out and put it on a chair in the dining room.  I grabbed my garden 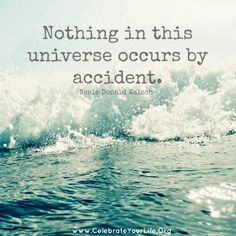 gloves, sat down and took a deep breath as I was sitting there, I turned my head and caught a shimmering glimpse of something……and on the table right next to me was my RING!!!!  There are no words to explain how happy I was to find it but I also had no explanation about how it got there.  I’m still in a happy state of shock actually. I didn’t care how it got there, all I knew was that I was happy it was!  In retrospect, I must have done ok at hiding my panic because the girls played happily when they were bored of looking and while I was silently freaking out.

There seems to be no “logical” explanation as to what had happened and I know some of you are thinking I took the ring off and left it sitting on the table (because I questioned myself on that as well), but I’m here to tell you THAT DID NOT HAPPEN!  I’m the kind of girl who likes to know the “why”s, so in trying to figure out the why or more so “how” my ring just showed up right next to me,  I decided to look into all kinds of theories or explanations including; Divine Intervention, Synchronicity, DOP (Disappearing Object Phenomenon) and Serendipity. 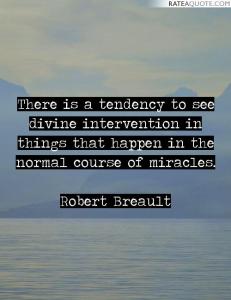 Divine intervention is a purported miracle caused by a deity’s active involvement in the human world. – Nope, I don’t think that fits this scenario.

Disappearing Object Phenomena (D.O.P) is a term that has come to describe those weird and creepy moments when an object seemingly vanishes from its natural location only to reappear, often after great confusion on the part of the owner, exactly where it should be or somewhere extremely obvious and apparent.  It was NOT where it should be, so Nope.

Another common reason for objects going missing and reappearing in the same location, is; someone else moved it and when they saw you were upset and searching they didn’t want to own up to it so they quietly sneak it back in its proper place when you aren’t looking. Admittedly, if you have kids (or grandkids in this instance) this is a plausible explanation, but I told the 4 year old, if she found it and put it on the table she was my all time super hero!  I could tell she liked the idea of being a super hero, but she didn’t own up to it and since I know I didn’t take it off, she is in the clear. How I wish it were that easy!

Synchronicity – events are “meaningful coincidences” if they occur with no causal relationship yet seem to be meaningfully related. Nope

Others attribute these kinds of things to ghostly activity, either because the spirit wishes to communicate with you or he thinks it’s funny to see you running around

looking for the object. You have to admit that if you were a ghost and had no way to interact with us mortals thumbing our noses at your existence, a good game of hide seek would probably break up the monotony a bit.

Serendipity – the occurrence and development of events by chance in a happy or beneficial way. Synonyms include (happy) chance, (happy) accident, fluke. This sounds like a plausible theory to me, but what do I know?

I really can’t figure it out but if you have an idea, I’m totally open to hearing it!  I still believe there was something larger than me at work here or was it just a coincidence that it popped up just as I was loosing faith that I would find it. As a matter of fact, Einstein described coincidences as being “God’s way of remaining anonymous”. And that my friends may be all there is to it but whatever happened, I’m just happy I have it back on my finger!

What is your theory?? 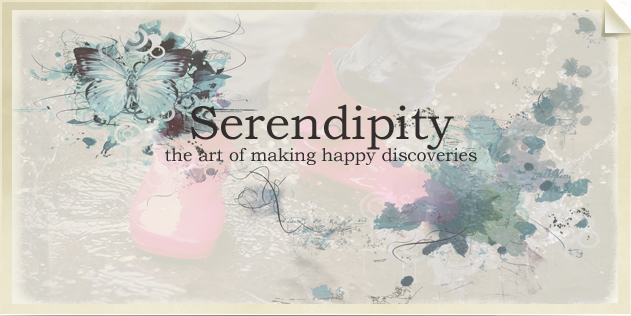